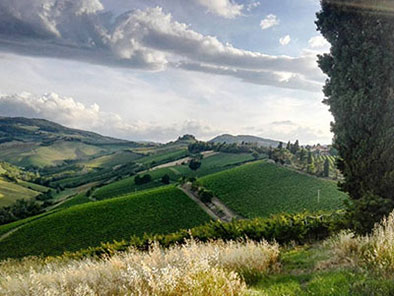 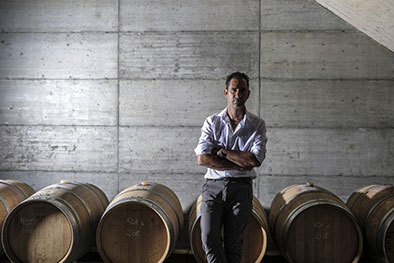 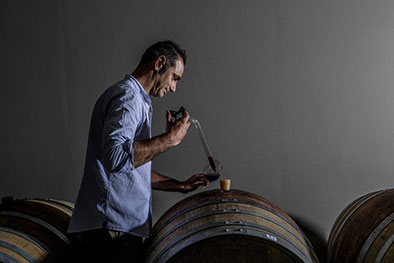 Ca’ di Sopra is hidden away in the hills of Marzeno, as so many small wineries are in one of Italy’s more underappreciated productions zones. These hills just outside of Faenza are home to brothers Camilo and Giacomo, the third generation of their family at the property, but really the first to focus on bottling rather than selling their grapes. 2006 was a landmark year for them, having produced 1,700 bottles rather than selling off all of their grapes, and they have grown year over year in this small corner of Romagna.

Camilo and Giacomo’s grandfather initially purchased this property in 1967, and the vineyards have always been primarily dedicated to Sangiovese, as so many are here. The plantings at the winery have had a mixed history, checkered with Chardonnay, Trebbiano, Cabernet, the local Albana, and Pinot Bianco. The whites express a great deal of minerality and complexity, helped by the fact that this part of Romagna was once under the sea and the soil consists of ancient fossils and limestone. The reds tend to be on the elegant side relative to the rest of Romagna, Marzeno being the most historic and important local production zone.

The family business has been growing steadily, thanks to Camilo’s background in business and Giacomo’s focused winemaking. Production is still very small, around 30,000 bottles per year, but the area of Romagna has started focusing more efforts on supporting these smaller, higher quality winemakers. In a zone where the majority of folks are still selling their grapes to cooperatives, it’s great to find folks investing in themselves. 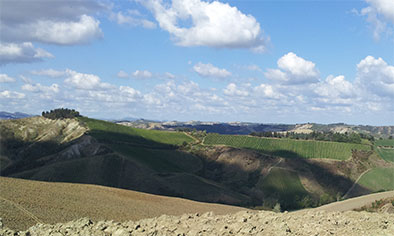 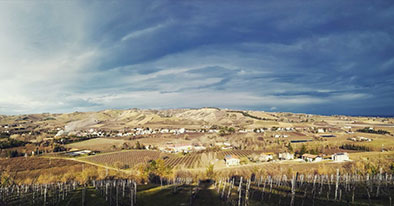 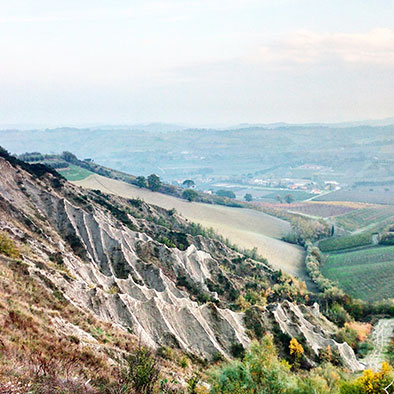 Ca’ di Sopra, or house on the hill, seems isolated in it’s own beautiful valley. The rolling hills of the area are mixed with their vines and apricot trees, as well as local farmer’s kiwi plants and olive trees. Vines go as far back as the 70s, with old plantings of Chardonnay and Trebbiano being replaced for more of a focus on Sangiovese, Albana, and Pinot Bianco, along with some older Cabernet and Merlot. The area planted to vine is about 29 hectares, a few of those being taken up by apricot trees.

Soil here was once under the sea, so there is a diverse mix of sandstone, along with clay and calcareous soil, anywhere from 120-250 meters. The farm uses a mix of organic and biologic methods, not vying for certification as the apricot farming presents certain challenges that prevent them from doing so. They hope total production will reach 35-38,000 bottles in the next few years. 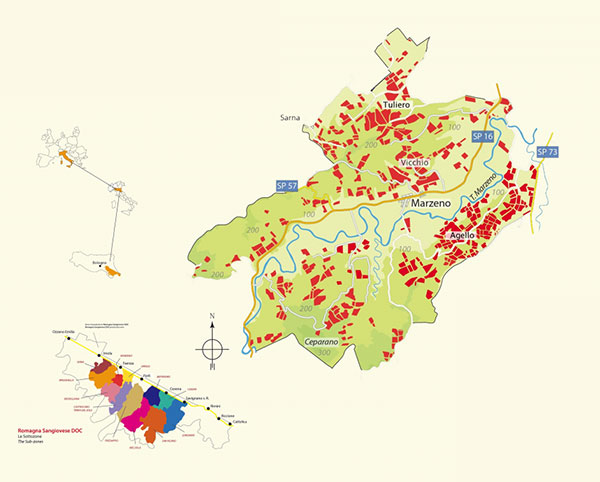 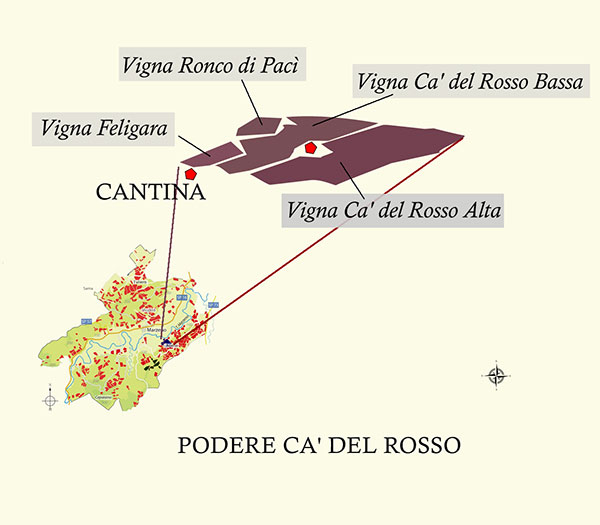 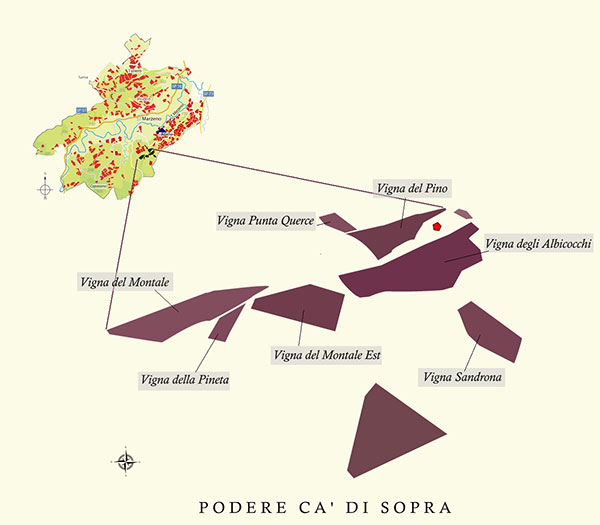 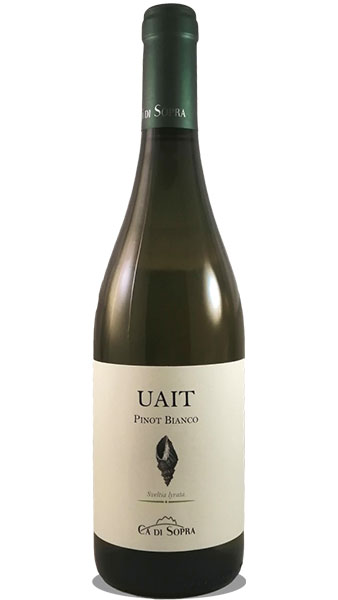 Pinot Bianco is not necessarily famous in the area of Marzeno, but it is a grape that Camilo and Giacomo have always loved. Planted on a small hillside towards the bottom of the hill, the wine is mineral driven, floral, and complex with stone and citrus notes. UAIT is a passion project here that excels in the clay and limestone soil.

First wine to be harvested on the property, the wines will ferment at room temperature before decantation is done at lower temps. The wine will then age in 6 months in cement before bottling. 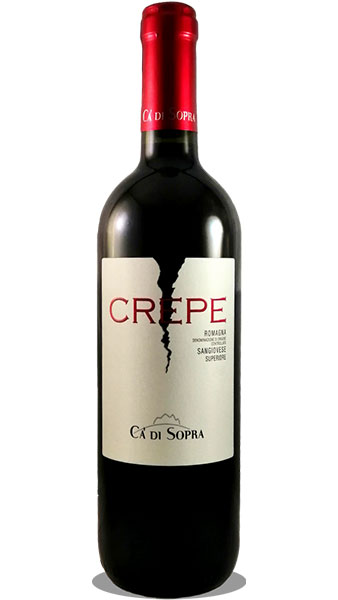 Sangiovese grown in Marzeno, and Romagna for that matter, tends to be a bit more “gentile”, or soft. That is certainly the case with the Crepe, but there is an underlying minerality and elegance thanks in large part to the mix of limestone soil found in these hills Crepe, meaning crack in the soil, is their youngest Sangiovese, with plush cherry fruit, with an underlying graphite and minerality, pleasantly floral as well.

The wines will all be harvested and fermented separately by section of the vineyard. These vineyards come from the youngest Sangiovese vineyard closest to the cantina, and will ferment spontaneously with 8-10 days of maceration. The wine will spend most of its time ageing in cement, while 10% will be leftover riserva juice aged in tonneaux, blended in before bottling. 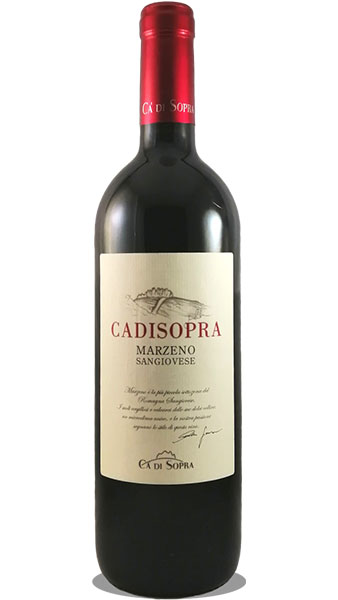 Benefiting from that limestone soil and NE facing vineyards, this wine tends to separate itself from others in Romagna. There is a minerality and elegance more reminiscent of Tuscany here, but still soft and pleasing in true Romagna style. Clones are Sangiovese Romagnoli as well as those used in Chianti, an interesting mix that leads to dark almost herbal cherry, violet, plums, graphite and cedar.

A selection of the best vineyard sites, NE facing rich with limestone. Grapes are harvested and will undergo a spontaneous fermentation with extended maceration on the skins, between 45-60 days. The wine will age in tonneux for about a year followed by cement and resting in the bottle.

SHOW ME THE PHOTOS
Go to Top