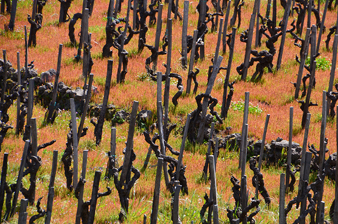 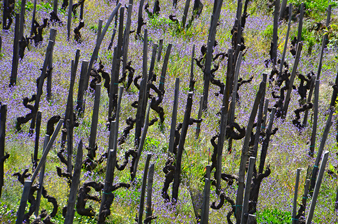 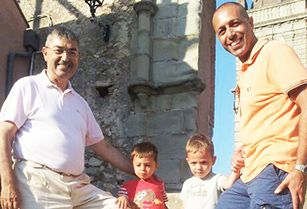 What is the most impressive terroir in the world? For my money it’s Mount Etna in Sicily. Bold statement, but it’s hard not to be impressed by the wines coming from this active volcano. Cantine Valenti is part of this very recent phenomenon that has seen a massive uptick in investment from almost out of nowhere.

Giovanni Valenti and his son Alessandro are part of this movement, having started Cantine Valenti in 2004. Unlike investors that have come from far and wide, the Valentis are proudly from Cantania and thus have always had a strong connection to Etna. If you don’t know they are Sicilian before meeting them, you will soon understand, as they have a warmth and very kind way of welcoming people that I have found to be so strongly engrained in the DNA of Sicilians.

Cantine Valenti focuses mainly on Nerello Mascalese, the true red varietal of the volcano. On the white side Carricante is their focus, again with Etna origins. The vineyards are some of the highest on Etna, the reds can be found at 700-800 meters above sea level within the famous Guardiola Cru. This section of the volcano marks the highest vineyard sites on Etna, some of which can be found at about 1,000 meters. Higher than that and you’ll be taking a dip in lava at the summit!

The Guardiola happens to be the name of a street in Passopisciaro named after the “guardiola”, who were guards that would take shifts standing in a tower overlooking this side of Etna looking for fires. This street of course runs right through this cru site, hence the name of the vineyards here. The hope on Mt. Etna is that wines from this part of the volcano (and others for that matter) will have this listed on the bottle so thatconsumers can begin to understand the diversity of wine from one part of the volcano to the other. Etna is full of small “contrade,” different sub-districts, all of which have their own story to tell. Just like the best wine regions in the world, certain “cru sites” should eventually arise for both the white and red wines of the volcano.

It’s amazing to drive up to these few hectares owned by Valenti as you are at first greeted by massive old lava flows. There is a sudden stop to the charred black ash, and out of nowhere an Eden of vines appears. A holy statue greets you and seems to be protecting the vines from further eruptions. On my last visit just recently Giovanni told me that God must have had a hand in the creation of these vineyards, as Sicilians have no other explanation.

Something does feel quite magical as you walk through the vineyard, stick your hand in the volcanic soil and glance above you to see the nearby peak of Etna. The vineyard comes together almost in the shape of a bowl with terraced plantings working their way up the volcano. The vines are 40-50 years old, but Valenti has just purchased a 100 year old vineyard directly adjacent to their other plots, where they will create some reserve wines. This new vineyard completes the puzzle as Giovanni put it, filling in this little paradise with the final piece. 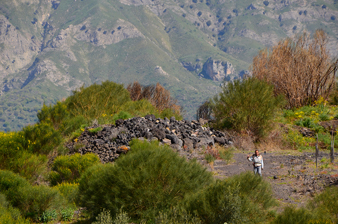 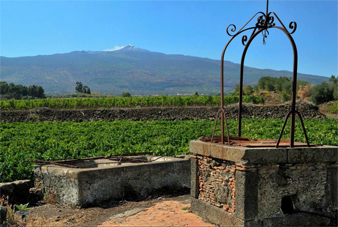 Valenti is adamant about organic practices in the vineyard, using only natural products to prevent disease and treat the vines. Giovanni always points out the incredible diversity of plant species on the property and wild herbs that his wife will come and pick to make a few of her great dishes. Grapes are harvested by hand at very low yields, in fact it would be tough for a machine to pass through the terraced vines. Historically, donkeys or other farm animals would be used to help till the land, something that still occurs at Valenti.

The winery, a converted old distillery that has been cleverly designed to enhance the winemaking process, is full of modern technology that help Cantine Valenti create their very natural style of wine. The tiniest amount of sulfites are added to the wines and all chemical substances are avoided, a strategy that has been aided by the incredible investment in modern winemaking technology. This includes a nitrogen system used during and after fermentation that enables Valenti to avoid using sulfites altogether during this period.

The Valenti’s are huge fans of the arts, in fact as a youngster Giovanni studied to be an actor in Rome. His two reds Norma and Puritani are named for Italian operas by Catania born playwright Vincenzo Bellini. Enrico IV, the name of Valenti’s white wine, is an Italian novel by Luigi Pirandello. 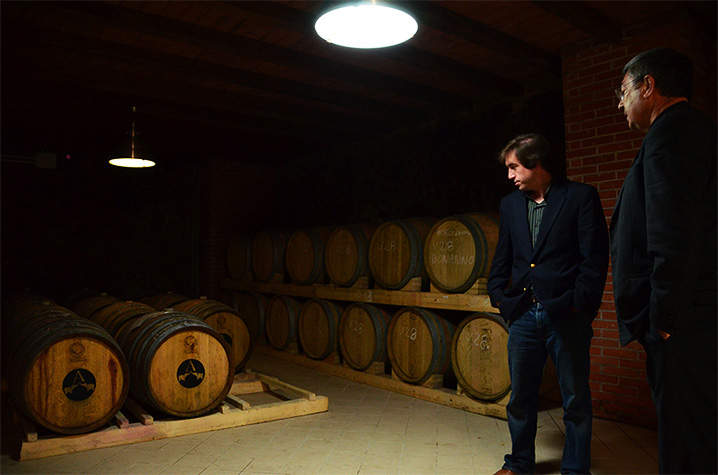 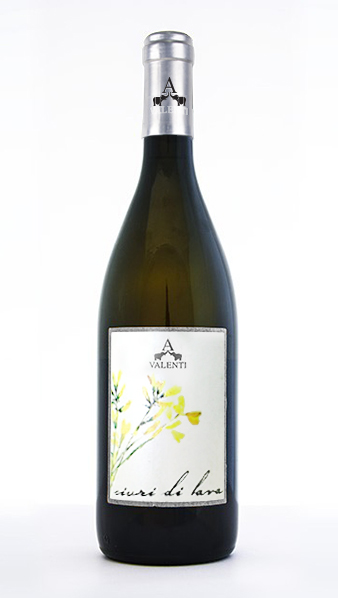 An experiment by Valenti that comes from a very tiny vineyard at about 500 meters of elevation. This wine is funky, being made without added sulfites. It’s rich, full bodied and has oxidized notes of grapefruit and melon.

This wine is bigger than expected and would pair very well with salmon or more hearty seafood. This also would work well with chicken on the BBQ, and flavorful pastas.

Grapes are harvested by hand in early September. This wine is incredibly unique for the golden color it has in the glass. That’s because after fermentation there is a 4 month maceration period. Yes, I said 4 months! Incredible, really! The wine will then age in stainless steel for 5/6 months under an oxygen controlled environment. 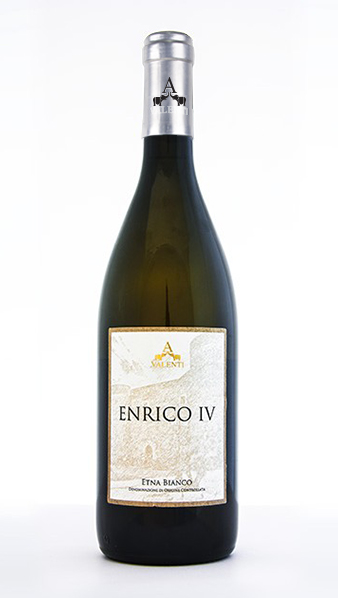 Etna whites have not yet received the acclaim that their red counterparts have, it should only be a matter of time. Carricante is seen as the most expressive Etna white. This one certainly doesn’t disappoint with aromas of grapefruit, mint, and tropical fruits. The wine is dry, medium bodied and has incredible aging capacity. This is apparent in the mouth, where you are hit with a wave of acidity and minerality that might remind you of Sancerre, Roero or white Burgundy.

Oysters or anything from the sea, white meats like chicken and semi-aged cheeses.

Grapes are harvested by hand in early September. The grapes are left in contact with the skins for at least 8 hours to favor aromatic extraction. The wine then undergoes a spontaneous fermentation and ages for 8 months on the fine lees in stainless steel. 3 more months aging in the bottle are needed before release. 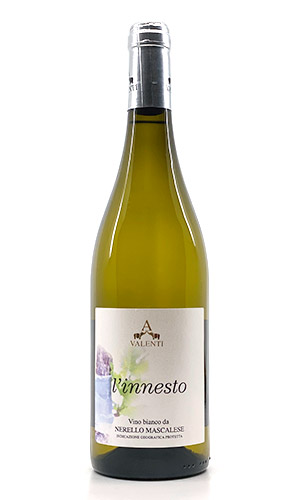 What I’ve loved most about this wine since Giovanni started producing it in 2018 is the fact that it is oh so very Etna. By that I mean chalk full of minerality, salinity and that volcanic flair.

Oysters or anything from the sea, great with fresh cheeses or summery pasta dishes.

Grapes are harvested by hand in early September. The grapes are immediately pressed with a very gentle press. Valenti chose a long fermenation to extract aromas as much as possible. From there it ages in stainless steel, with a short time on the fine lees, before bottling. 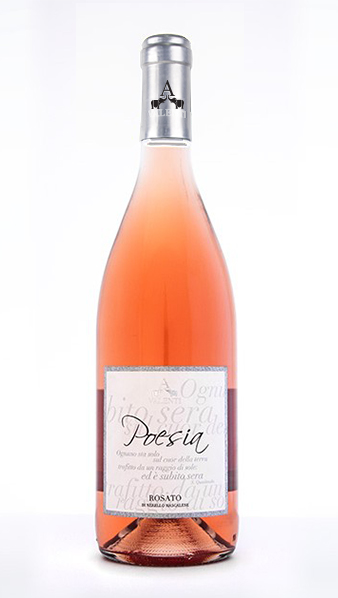 This rose has a beautiful cadmium red color coming from the lightly colored Nerello Mascalese grapes, an indigenous grape to Mt. Etna. Elegant and floral, this is not your delicate rose however, being quite rich and remaining so beyond a year after bottling. Red fruits dominate with fresh strawberries and raspberries standing out above all. This wine has incredible minerality and a very refreshing quality. The finish is quite long.

The minerality in this wine pairs so well with fried or grilled seafood. It also works nicely with an aperitivo of meats and cheeses. Try it with pizza too!

Grapes are harvested by hand at 750 meters above sea level from some of the highest vines on Etna. There is a some brief skin contact before fermentation helping to create the cadmium red color. The wine will then be moved to stainless steel where it ages for 8 months. 4 months in the bottle separate the wine from release to market. 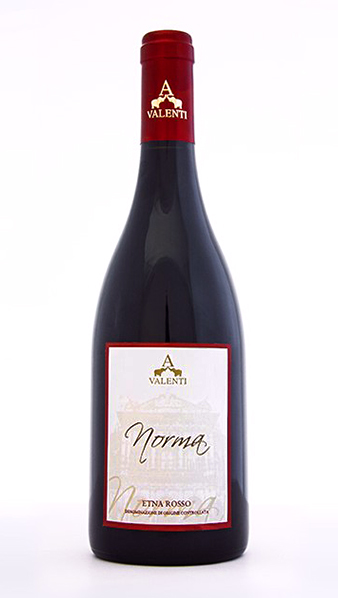 The beauty of Etna can be tasted in this wine. Floral notes and refreshing minerality are what first come to mind. Norma helps us understand why Etna is being considered by many to be the next Burgundy.

What makes these wines so interesting is their versatility. This wine won’t overpower a piece of grilled swordfish and for that matter fried fish. Great pairing for red meat or wild game, aged cheeses and of course, pasta alla norma!

Grapes are harvested by hand in late October from vines with 40-50 years of age. Temperature controlled fermentation ensues under inert gassing, allowing Valenti to avoid the addition of sulfites during this part of the process. The wine is then aged for 7-8 months in Slovenian Oak. It will remain in the bottle a few more months before release. 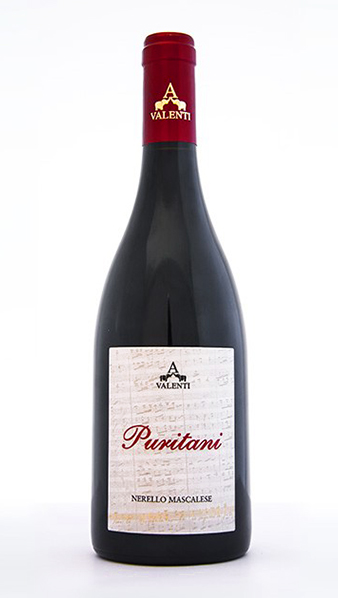 Moving from the Norma, the Puritani is a completely different wine. A much richer mouth feel and deep complexities are the result of longer time spent in oak. However, the choice of Slovenian oak is crucial, as it has helped to create structure but does not overwhelm some of Puritani’s more subtle notes. Despite being bigger, this wine has so much elegance, drinkability and food friendliness. It is no wonder why people can’t get enough of Etna wines. Red fruits and spice are apparent with some nice acidity to finish off this wine.

Grilled meats; this is your classy summer BBQ red wine. Try it with venison as well, or pheasant or quail. Aged cheeses also work!

Grapes are harvested by hand in late October, the selection of the grapes both in the vineyard and upon arrival to the winery is very important for this wine. Maceration of at least 20 days ensues in the winery, one way this wine separates itself from the previous Norma. The Puritani is aged for at least 18 months in Slovenian oak of 2nd or 3rd passage, the biggest barrels being of 50 hectoliters (helpful to create an elegant style and not have too much influence from oak).