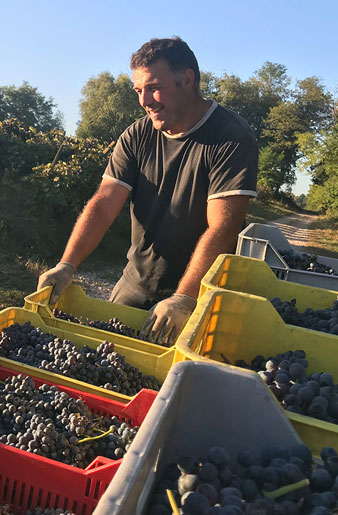 The story behind Francesco is a variation of one that we’ve heard from a few of our producers, one that seems to get more and more charming with each telling. Francesco’s father and grandfather had been bottling wine in demijohns along with selling some grapes, making decent wine that they could sell in nearby towns. Francesco was the first generation to study at the university (nearby Turin), and would ultimately take the family winery to a new level of quality.

It dates back a few generations, when Francesco’s grandparents were farming corn and raising cows and horses like most of their neighbors. Francesco’s grandpa (much to the chagrin of his grandmother) decided to sell his animals to invest in resources for is true passion, winemaking. Within Alto Piemonte, their town of Suno is more known to farm corn and other fruits and vegetables, but does share very similar climate and soil to the nearby Boca and Gattinara. As we familiarize ourselves with his wines, his rolling hills of sandy/clay soil enriched with Magnesium and Potassium serve as a wonderful production area.

Fast forward to 1996, when Francesco’s father passed down leadership of the project to his son, and Francesco would make two very important decisions. The first would be to farm and make wines following biologic and natural practices, believing in the importance of healthy vineyards and minimal intervention the in the winery. The second would be to showcase the region’s grapes in monovarietal form (aside from his grandfather’s original blend in the Motziflon) believing in the potential of Alto Piemonte’s Vespolina, Erbaluce, Uva Rara, and Nebbiolo.

Francesco is an encyclopedia of knowledge, and in an area where only a handful of folks make monovarietal wines, his experience and know-how is vital. Each vintage production tends to be around 30,000 bottles, and each year he is making wine almost by feel, an admirable combination of skill and experience. 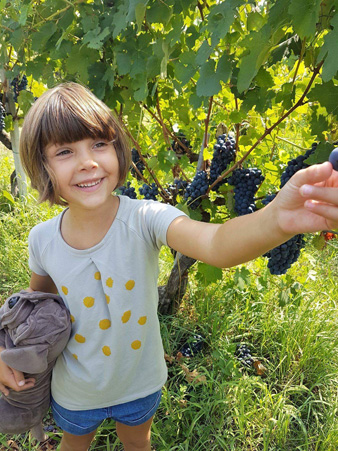 The town of Suno is dominated by fruit and vegetables, mostly corn, but does boast all of two winemaking families! The rolling hills here feel like other production zones in Piedmont, except the hills are a bit smaller and the forest areas are a bit greener. The hills are enriched with minerals, a few of which are the home to Brigatti’s 6 hectares of vineyards.

Although only about half a mile away from each other, his two principle hills have very different composition. The hillside of Motziflon (“mot” meaning little hill and “ziflon” meaning birdsong) has a mixture of sand and clay, and is home to mostly Erbaluce and Vespolina, along with some Nebbiolo, Uva Rara, and a few rows of Barbera. Around the corner is Motfrei (“frei” the dialect for local mushrooms growing there), which is mostly red sand along with clay, and will produce a wine with more elegance than the rest of Piedmont. We can’t forget about his Ghemme, the vineyard site is one he has been renting from his friend and manages throughout the year.

The physical winery is attached to his family’s “compound” where Francesco lives with his wife and 3 children, his parents in a separate house next door. The winery portion of the compound contains two sections, the older part that was once home to his grandfather’s cows and horses, and the newer section that houses a small tasting room and his winemaking equipment. That equipment is a combination of cement and stainless steel vessels, along with some tonneaux and large oak barrels and even those old demijohns that I mentioned. Thanks to vineyard sites that are dense with minerals (Potassium and Magnesium specifically), the wine has a zesty, almost lime-aid energy to it, while also have plenty of round texture relative to many other Erbaluce. As it opens up, hints of flowers and citrus turn to herbs and stone fruit.

The Erbaluce undergoes a natural ferment after 5/6 hours of skin contact. This is just the right amount of time for him as far as giving weight and texture but still being elegant and representing his terroir. The juice will remain on the fine lees for about three months, then it goes into a vat outside the winery to cool and stabilize naturally. 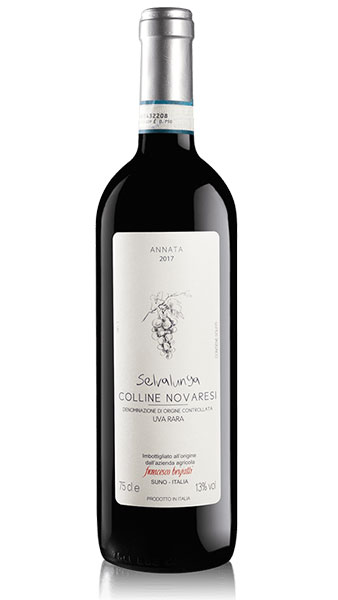 Not seen all that often outside of local blends, Uva Rara is one of those highly aromatic and bright varieties.  Think Frappato from the north, perhaps even leaner, with more aromatics and a balanced acidity.  One of only a handful of producers who make a monovarietal, Francesco describes this wine as simple but with delicate lively character.

Young cheese and prosciutto, serve with a touch of chill

Grapes are collected at the end of September, followed by 5 days of maceration during fermentation.  A few months in stainless steel followed by a few in the bottle, expect the wine to be at its peak when young. 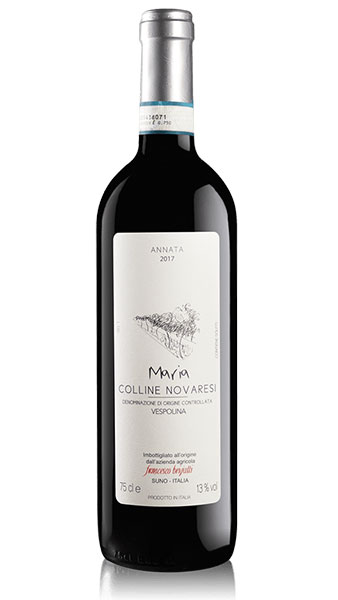 Vespolina is Alto Piemonte’s best kept secret. Most producers use oak to round out the tannin but Brigatti uses only stainless steel. In the end he wants the true characteristics of this varietal to show. “Maria”, named for Francesco’s daughter, has the aromatics of a lighter spicier red, but wonderful grip on the finish. In the end it opens up wonderful options as far food pairings go!

Hand-harvested in late September, the juice does 6/7 days maceration on its thin skins and ages in stainless steel. 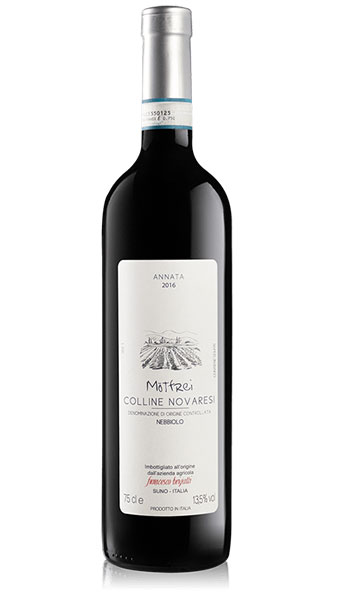 One of two Nebbiolos produced on Brigatti’s 6 hectares in Suno. “Mot” means hill and “frei” means porcini mushrooms, which grow wild here. This is 100% Nebbiolo from the a bit lighter soil than his other Nebbiolo, a mix of clay, gravel, and sand. Drinks a bit more linear and is more aromatic than Nebbiolo from the Langhe area, cleaner, with hints of Cinnamon and herbs.

The wine will age 18 months in 500L French oak after a natural fermentation. No filtration before bottling. 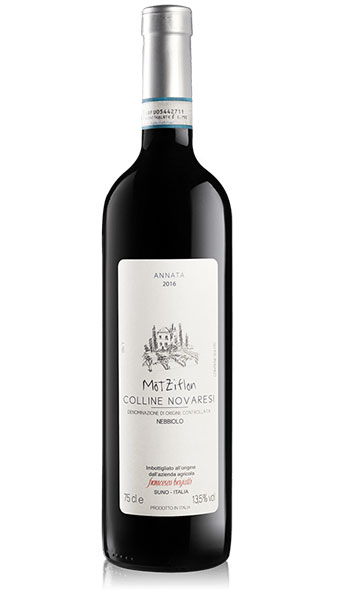 A classic blend of Alto Piemonte, the vineyard is setup the same as when his father produced this style of wine back in the 70s. “Mot” again means hill,with “Ziflon” translating to bird song. Elegance matches the Motfrei with a bit brighter aroma thanks to the Vespolina, but there is more power and secondary notes from Nebbiolo thanks to heavier soil, with a hint of soft fruit from Uva Rara.

The juice will spend a few weeks longer on the skins before 24 months in 30 hL Slavonian oak. Fermenation is spontaneous, and the wine will not be filtered. 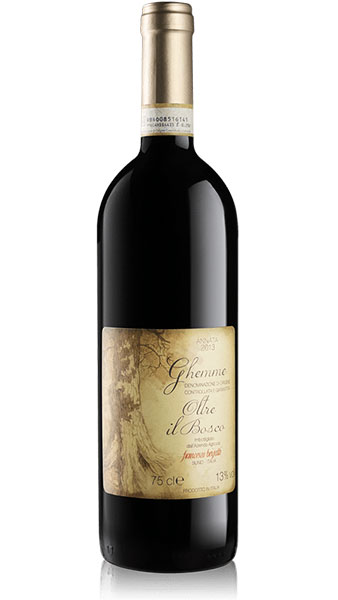 This is a small property that Francesco rents from a longtime friend. “Otre Il Bosco” means beyond the forest, as Ghemme is through the woods from where Francesco’s property in Suno is located. Rose petal, small red fruit and spice, along with earthy tannins and notes of tobacco, pepper, some cooked cherry.

Venison or wild boar
Anything with tartufo!

The wine will spend 60 days on the skins in cement, during which natural fermentation will occur. This was the style of his grandfather, who forgot about the wine for a period and left it in contact with skins longer than expected, applying more power than in his other wines. 24 months in older French Oak after the time in cement.